Only ever one woman 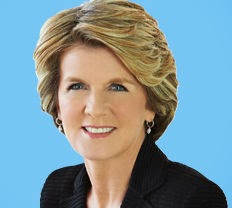 So much of Abbott’s agenda was apparent prior to him assuming office last week, including the almost complete exclusion of women from his Cabinet.  Key online Liberal Party election material ominously featured only one female member of parliament – yes, the Honourable Julie Bishop.

The Coalition’s ‘Plan’, Facebook page, Youtube channel and QandA were dominated by appearances of male members of parliament.  Margie Abbott, Julia Gillard and even Kevin Rudd were more visible in Coalition election publications than female MPs.

Despite the dearth of pictures of female MPs, one woman's face appears repeatedly: the face of Julie Bishop.

For weeks leading up the polling day, Liberal candidates were seen carrying around the party almanac, Real Solutions.  The slick document is sparsely illustrated – including more graphics than pictures of real people.  Of the half dozen photos of members of parliament, there are photos of only one woman – the new Minister for Foreign Affairs, Julie Bishop.

Open the Liberal Party website and, reassuringly, there is a page titled ‘About Women’.  Yet, click on the page and there is only one smiling face of a Liberal woman – yes, Julie Bishop.

The Liberal Party Facebook page includes more pictures of Kevin Rudd than female Liberal candidates.  In posts on the page over the past three months, two small photos of women are highlighted: a photo of losing candidate Sophie Mirabella and … Julie Bishop.

There is, of course, no shortage of photos of the beaming Abbott women, Mr Abbott’s wife, Margie, and their three daughters, who are featured on Facebook, Youtube and in the ‘Plan’.  Yet a ‘Google’ search for ‘Liberal Party images’ generates more pictures of former ALP Prime Minister, Julia Gillard, than any other females.

A ‘Google’ search of ‘Liberal Party women images’ produces many pictures of women, but most of them are unfamiliar faces – except for the face of Julie Bishop.

After being featured so heavily and exclusively, the Hon Julie Bishop is the only female Cabinet Minister of the Coalition.

''The number of women in the ministry will build over time. Currently there are a number of capable, talented women who will be considered for cabinet in due course,'' Ms Bishop told ABC Radio.

"You can serve the people from wherever you sit," Minister-in-waiting Sussan Ley said to Lateline. "This isn't really about the front bench.  I would like to see more women in the Parliament.  We have to encourage more women to put their hand up for Parliament."

"I am delighted to be helping the new paid parental leave through the parliament" to help more women into the workforce," Ms Ley said.