A Foreign Minister should travel to foreign lands, it is true.

The Age reported today that former Foreign Minister, Bob Carr, travelled frequently and at considerable expense in the latter months of 2012.

Just how often he travelled can be drawn from an analysis of Senator Carr's entitlements claims.

From July to December 2012, Senator Carr was on the move for over four months in total. 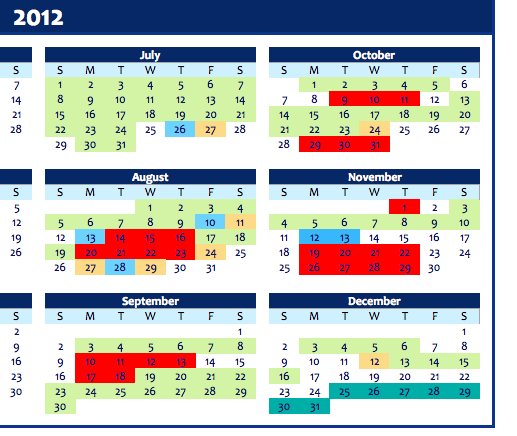 The green shaded areas of his diary represent travel overseas; red areas, when he dropped into Parliament to speak in the Chamber; blue shaded areas involved official business.  All MPs and staff are away for the Christmas break.

Senator Carr said yesterday that the former Labor government had "lost its way".  After all that travel, Carr now has to find his way home.
Posted by Unknown at 3:50 PM