Shorten: man of the powerless 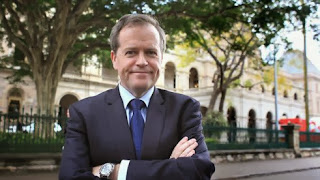 For three long, cold weeks in August 2010, Bill Shorten stood at the Moonee Ponds pre-poll centre wearing a grim expression.  He was not sure the gamble of replacing Kevin Rudd with Julia Gillard would pay dividends.

I stood next to him handing out ‘how to vote’ cards for the Greens, through gloves, scarves and bitter winds.

He was pre-occupied, but chatted about local issues, his family and the fortunes of the Labor party.  He said he wasn’t sure Gillard would make it.  I thought she had it by two seats – not realising they would be the seats of Rob Oakeshott and Tony Windsor.

Critics have called-out his ambitious and ruthless style, but I met a professional and intelligent politician openly anxious about Labor’s future.

Three years later, Labor’s future is in his hands.  Are his hands steady, manipulative, controlling or nurturing?  Most commentators are wary.

Much has been said about his baggage as a union organiser and key player in Labor’s three-year-long leadership woes.  He is clearly sharp, impatient with fools and unapologetically driven.

But Shorten is also thoughtful and astute and has a strong sense of fairness for the voiceless and powerless.  His sense of responsibility is reflected in the words used in parliament more so than in his tidy responses or quips to the media.

“We should always listen to people who lack power. It is not just our duty, but a key source of advice on how this parliament and this country can conduct themselves,” he said in March 2011 when speaking of people living with debilitating medical conditions.

The reference to ‘people who lack power’ was repeated in Shorten’s campaign for Labor leadership: “I would like to be known as the PM for the powerless.” Given his union background, he has often used the phrase in the context of workers who are underpaid, injured or bullied.

And in June 2012: “Let me talk about some of the most vulnerable Australian workers in Australian society—those who get injured.”

Last week in Crikey, Guy Rundle penned a scathing critique of the now opposition leader.  He wrote: “Shorten is willing, even keen, to make the world a better place while on the road to accumulating power, but it’s strictly a sideline. All along, Shorten — the manic student politician, the endlessly networking unionist, the relentless MP — has been powered by an ambition that appears, at its core, to have a vacuum to it.”

Shorten’s speeches in parliament do not indicate vacuousness.  His speeches, if thematically limited, point to an observance of the ways in which parliament can improve the lives of workers and their families.

In March 2012, Shorten spoke of his most famous pre-parliamentary moment – the Beaconsfield mine tragedy.

“I remember the Beaconsfield mine tragedy and rescue. The whole of Australia willed Brant Webb and Todd Russell to be brought out of that goldmine alive. … We all exulted with joy and relief when they emerged smiling and waving. I witnessed the joy and relief of their families. But one miner did not make it out of that mine alive: Larry Knight. I attended his funeral. I saw how Larry's family felt; I can imagine how they are still feeling.”

This rhetoric could be cynically dismissed as emotive media-bait, but Shorten’s intense tone is repeated in parliament.

“Last week, organised through the Transport Workers Union of Australia, I met with wives and mothers and friends and families, the bereaved of truck drivers and bystanders who have lost their lives…” (March 2012)

The solemnity of his speeches is sometimes punctuated with sharp attacks on the other side – frequently in response to interjections or jibes.  He throws quick-witted arrows, as well as fully-fledged attacks dripping with contempt.

Rundle attacked Shorten for not having “personal heft” and “genuine politics”.  If Rundle is referring to reputation and sincerity, Shorten does have to make up some ground to convince people he is genuine and develop reputational ‘heft’.

However, Shorten is smart, articulate, a political salesperson and intent on returning Labor to power.  He also has his eye firmly on workers and their families – and that focus may determine Labor’s future.
Posted by Unknown at 7:21 PM