Should Geoff Shaw be expelled from the Victorian Parliament? 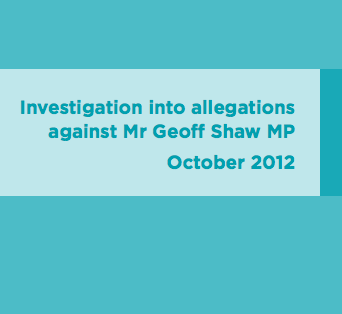 It's a tough call.

The Labor party thinks he should be expelled; and according to Fairfax reports, so does the former Speaker Ken Smith.

Many Victorians would be glad to see an end to two years of unimpressive manoeuvres by the independent Frankston MP who, by being a lone power-broker in a finely-balanced House, has seemingly forced out a Speaker and a Premier.

But what has Mr Shaw done and does it warrant expulsion from parliament?

Mr Shaw's predicament turns on the use of his electoral car for business purposes. A report by the Ombudsman isolated a handful of occasions on which it was agreed by the parties that the car was used for Mr Shaw's business.

Using the car for commercial purposes is considered a breach of the MPs' code of conduct that says "Members shall accept their prime responsibility is to the performance of their public duty" and will avoid conflicting private interests.

Code of conduct for members: Section 3 of the Members of Parliament (Register of Interests) Act 1978.

3 Code of conduct for Members
(1) It is hereby declared that a Member of the Parliament is bound by the following code of conduct—
(a) Members shall—
(i) accept that their prime responsibility is to the performance of their public duty and therefore ensure that this aim is not endangered or subordinated by involvement in conflicting private interests;
(ii) ensure that their conduct as Members must not be such as to bring discredit upon the Parliament;

A wilful breach of the code is considered contempt of the Parliament for which the form of punishment can be determined by the House.

9 Failure to comply with Act Any wilful contravention of any of the requirements of this Act by any person shall be a contempt of the Parliament and may be dealt with accordingly and in addition to any other punishment that may be awarded by either House of the Parliament for a contempt of the House of which the Member is a Member the House may impose a fine upon the Member of such amount not exceeding $2000 as it determines.

Mr Shaw says he did not know the car was being used for commercial purposes and he did not give permission to his business partners to use it for business purposes.

Nevertheless, Mr Shaw did nominate his business staff as authorised drivers of his parliamentary vehicle.

One of the identified uses of the car was for a trip to Warrnambool on 21 February 2011.  When the Ombudsman asked him why he gave his parliamentary vehicle to a business colleague to use to drive to Warrnambool, Mr Shaw could not recall a precise reason. 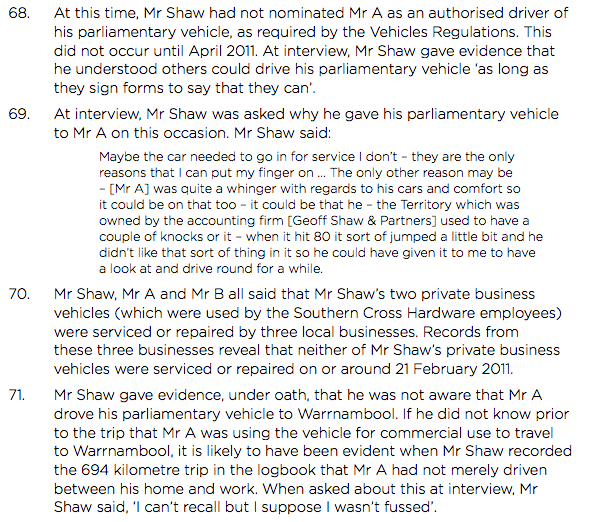 Mr Shaw completed a logbook entry signing himself as the driver for the 694km private trip (PVT).

Does this example constitute 'wilful contravention' of the code of conduct and does it warrant expulsion?

The Opposition members of the Privileges Committee believe it does, when combined with other documented examples.  They say that Mr Shaw's "recklessness, careless conduct and complete indifference to his obligations" constitutes wilfulness and that the Ombudsman's report documents examples of this behaviour.

Mr Shaw wrote an impassioned submission to the Privileges Committee stating that "the Ombudsman's Report is based on an inaccurate account of the relevant facts".

Mr Shaw accused the whistleblowers who brought the original concerns to light of being disaffected former employees one of whom had "resorted to extreme measures of retaliation and extortion".  He said "they chose to take their photos and photocopies to the media to extort me to maximum effect".

Mr Shaw said he has experienced a "trial by media" and had been the subject of an investigation political in nature involving "dirt" and "spite" and "political lynchings".

The whistleblowers have stated their case to the Ombudsman, but were not called to the Privileges Committee.  They stated that Mr Shaw had told them they could use the parliamentary car for Mr Shaw's business purposes:

Charges against Mr Shaw arising from these claims were dropped by the Director of Public Prosecutions in December 2013.

Has Mr Shaw wilfully breached the code of conduct amounting to contempt of the Parliament warranting expulsion?  It is a tough call.

Certainly, signing over the use of a parliamentary car to business associates, admitting to wrongly signing a log book for the use of the car and accusing whistleblowers of bringing concerns for purposes of retaliation doesn't look good.

Those arguing against expulsion say a dangerous precedent arises if the House can gang-up on a democratically elected independent and cause a by-election.

Alternatively, a by-election does return the power to the people: if they feel the Member has been wrongly punished, they can re-endorse them at the ballot box.

It is open to the Lower House of the Victorian Parliament to make a finding and exact the punishment it sees fit.  The decision in this case is made all the more complex because of its political implications for a government hanging on by one vote.

It has taken two years for the parliament to consider sanctions in this matter.  In the political thunderstorms anticipated in the House this week, let's hope for a break in the clouds and a resolution to this saga.