The boats have stopped, but not the protests 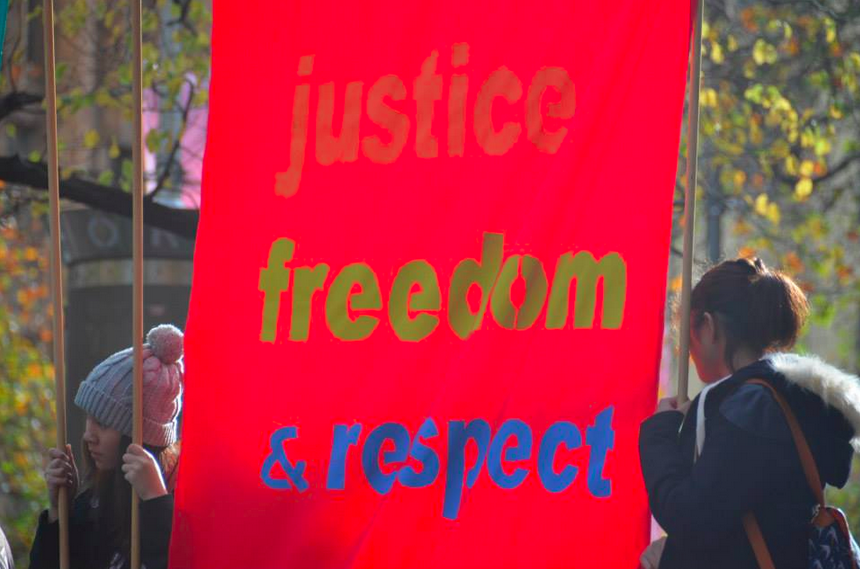 The boats may have stopped, but discontent with Australia’s treatment of asylum seekers continues.

Hundreds of Melburnians rallied to protest offshore processing on Manus Island and Nauru as part of World Refugee Day on Sunday.

The Minister for Immigration and Border Protection, Scott Morrison, has remained uncompromising in his tough stance on “illegal arrivals”.

In a statement he said “the government remains resolute in our determination to stop the boats”.

But the people who gathered in Melbourne’s CBD expressed shame and embarrassment at Australia’s “disgraceful” policies on asylum seekers.

Michael*, 62, said he was upset by existing policies. “I think the government is not representing me as an Australian.  I hate to think what [other nations] think of Australia.”

David, 65, from Beechworth said he was “ashamed of what the Australian government is doing to the most desperate people”.

Dressed in his St Kilda football club scarf, Tom said he was “disgusted with the way refugees are treated”.

He was referring to Australia’s system of detaining asylum seekers, who arrive by boat, in offshore detention centres on Manus Island and Nauru.

Nicole, a 34-year-old barrister, said she believed offshore detention was a “deliberate way of making sure there is no scrutiny” of what goes on in the centres.

Despite differences in age and origin, protestors shared similar visions about what their preferred asylum seeker policy might involve.

He said Australia should be using its close connection with Indonesia to develop “proper, efficient and fair” processing in Indonesia to prevent people resorting to unsafe voyages by boat.

But should boats still arrive, Michael supported asylum seekers remaining in community detention while their claims were processed.

Nicole said she had "no issue” with boats coming and that Australia had “plenty of resources”.  Annie agreed: “Australia is a country well positioned to assist others in need and should be doing more."

Tom saw value in sending asylum seekers to regional areas to assist farmers and producers while their claims were processed.  While Beryl, an elderly protestor, said she believed in bringing refugees straight to Australia.

Former Speaker Anna Burke spoke to the crowd disagreeing with her Labor party’s policy to support offshore processing at Manus and Nauru.

“We need to do better,” Ms Burke said.  The issue “should not be a political football”.

“Each asylum seeker that seeks protection should be treated with dignity and humanity and treated as a human being."

Annie said she did not labour under illusions that the Abbott government would heed the views expressed at the rally.

She went to the rally to show her “depth of feeling”.  She believed her attendance demonstrated a commitment beyond merely sending an email or signing a petition.

Joined by her five-year-old twins, Jane, 40, said “no one really acts” on their concerns.  She wanted to publicly “take a stand” to prompt the government into action.

Kaz, 37, said he hoped passers-by would notice the rally and be prompted to ask why people were supporting asylum seekers.

“’Asylum seekers’ is a label we created.  We should call them people fleeing persecution,” said Kaz.

Deputy leader of the Greens, Adam Bandt, also addressed the crowd that marched through the Bourke Street Mall led by MC, Corinne Grant.

*Names of interviewees have been changed. 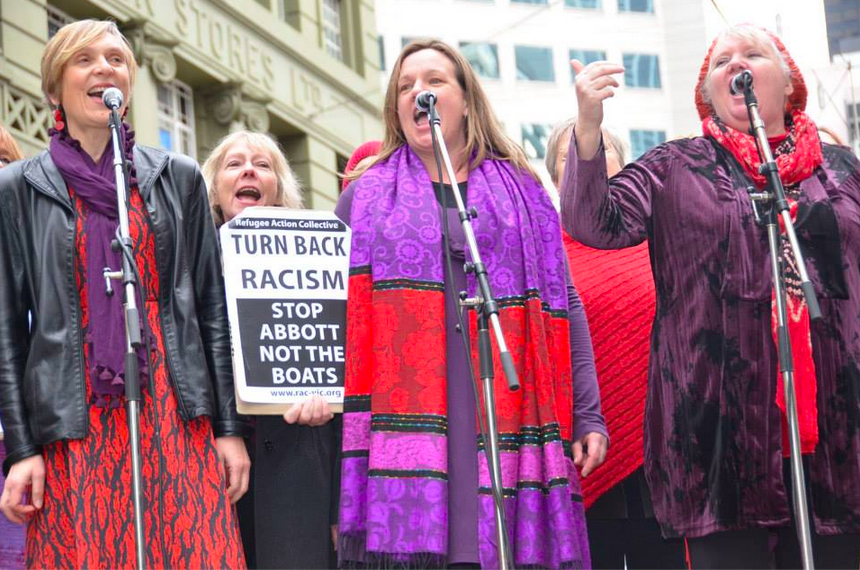 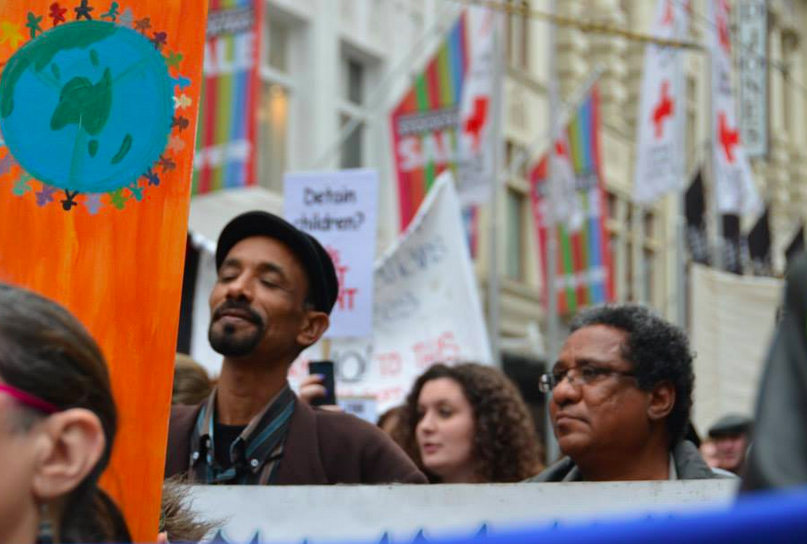 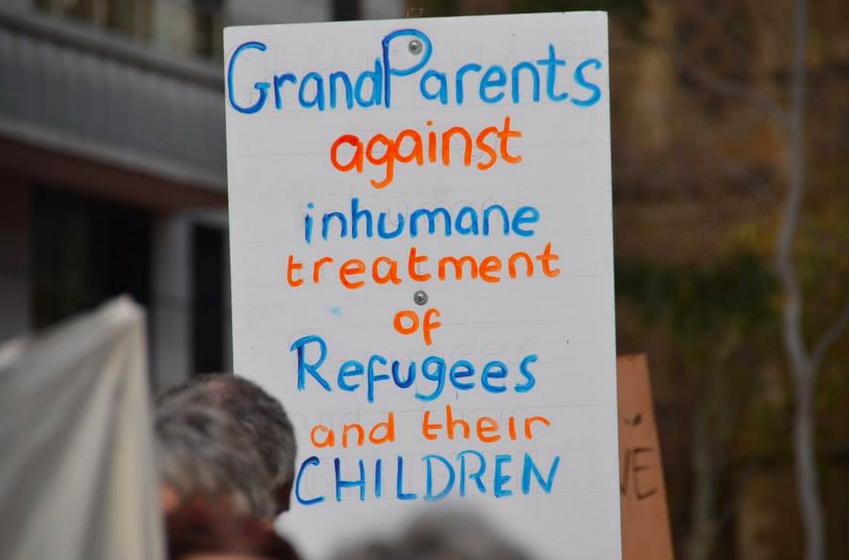 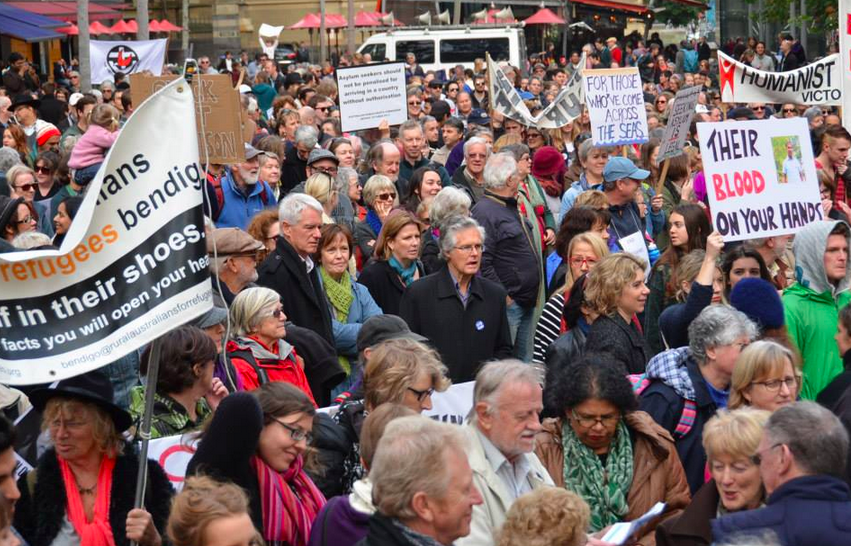